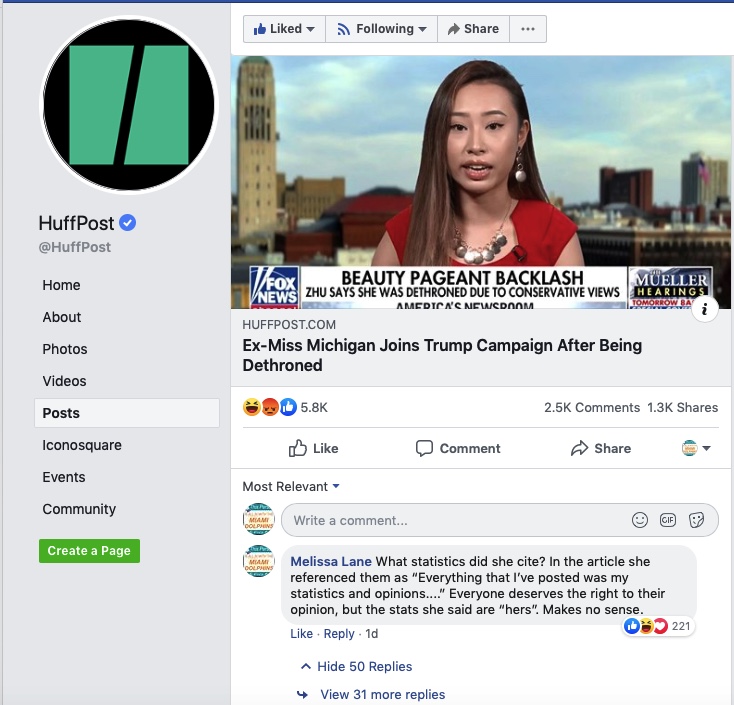 How Social Media Allows You to Puff Out Your Chest

I’m taking a break in between Bachelorette stories to discuss something that has been on my mind and something #manofmystery and I have discussed many times before. (FYI #manofmystery is my boyfriend who hates all things social media.)

With that being said….

Social media gives everyone a platform to say things and to puff out their chest – no matter how ignorant their comments may be. I tend to do a lot of reading on social media. And in my older age, I tend more NPR, CNN, and in a recent case, HuffPost.

I usually read and comment in my head, but on Friday night as I was on the bus home from work when I read a HuffPost article focusing on how ex-Miss Michigan, Kathy Zhu, was so excited to be named to the Women for Trump advisory board.

Why any woman would support the Orange President is beyond me. But again, that is a different story, for a different time.

Here’ s the backstory. Kathy was dethroned from her Miss Michigan title because of racist comments she made on social media. AND THERE IS PROOF. ON SOCIAL MEDIA. Case #1 of thinking social media gives you a platform to puff out you chest. We’ll discuss the ignorance of her comments another time.

Part of the article focused on what Kathy was citing as “my statistics and opinions”.  Direct quote. Now, I believe everyone has the god-given right to their own opinions. But stats are stats and they are truth. NOT “my statistics.” Her comments just didn’t make any sense to me.

So I said just that in the comment section. How can “her” stats actually be stats unless they are backed by, well..stats.

And I wrote that with the thought that no one would respond. Boy, was I wrong…

Case #2 – I may have puffed out my chest a bit writing that.

But Case #3 – so did many others. I was both supported and trashed by hundreds of people. NONE OF WHICH I KNEW. And many were trolls. They were looking to pick fights and cite incorrect reports. Some insulted me, made accusations, and cited false presumptions of me. Some said to ignore the trolls. And some actually backed up my opinion with facts.

At one point, I was upset I posted anything, but as I read the comments, I realized that while social media can be upsetting and demoralizing, it can also be liberating. I look back at what I wrote – I am not embarrassed or ashamed or concerned that if my dad or boss saw it, that they would feel concern. I was proud that my one little comment started a discussion.

Too bad I can’t say the same thing about the trolls who trashed me.

What are your thought on social media and puffing out your chest?